HF Radio and Pactor Modems vs. Satellite Phones for Email at Sea

HF Radio and Pactor Modems vs. Satellite Phones for Email at Sea

Edit: We’ve revisited this topic in a new blog post where we dig even deeper into the actual costs of doing ship-to-shore communications over HF radio vs. satellite phones. You can read that blog post by clicking here. 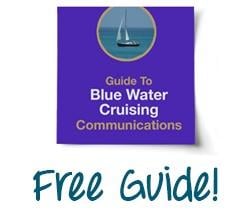 Time and again, we hear from boaters who ask about using HF radio with pactor modems to access email service. “But it’s ‘free’” they say. Well, it’s not. We have a lot to say about this subject and would like to take a few minutes to fill you in on the latest in the HF radio versus satellite phone discussion that has now been ongoing for the last 15 years.

First let me talk about HF radio vs. satelite phones. There is a nice recording here of a podcast on the subject:

You will also find a discussion on using your iPad for satellite communication as well as using a discussion between different satellite broadband systems.

Cost
It is much less expensive to purchase a satellite phone plus several years of airtime than it is to purchase a new Marine Single Side Band Radio.

Speed
Iridium data rates are at 2400 baud nominal, although if you purchase an AxcessPoint Wifi device or an wXa-200 router you can get over 3000 baud… Check this out:

Both of these phones are faster than Pactor III modems on a typical connection. Typical pactor connections are between 1-5 Kbytes per minute. Iridium is 15 (20) kbps).

For all these reasons it would be silly to go off shore without a satellite phone.

The major advantages of broadband devices over portables are price of airtime and speed. It takes 68 minutes to transfer one MB over Iridium handheld phones. At $1.29 per minute this means that 1 MB of data cost $87. Note that 1Mbyte is a ton of data in the narrow band satellite business. Your typical grib file is 10Kbytes. So you can download 100 GRIB files for the cost of 1 Mbyte.

Compare this $90 per MB price to the 3 broadband satellite services out there.

So… satellite broadband is 10 times cheaper for data than a handheld satellite phone.

If you use a broadband satellite device the same way you would use an Isatphone Pro or an Iridium handset your monthly airtime bill would be astonishingly low.

Plus, satellite broadband devices are fast enough to browse the Internet. So if you must browse then you have plenty of bandwidth to do so, you will simply want to use compression based software to reduce your airtime bill. Here’s why:

The www.cnn.com homepage is about 1 MB. This means that on an uncompressed link this page may cost you $10. If you use compression (our XWeb compresses on average 2-5x) then that page cost $2. That is a considerable savings.

One of the disadvantages of Broadband devices (as mentioned before) is that they are ethernet based. This means that if you connect your computer to an open connection you might end up with a surprisingly large bill. This is because processes running on your computer such as anti-virus programs, windows updates, adobe flash updates, etc. will detect the open Internet connection and try to use it.

So when using a satellite broadband device you MUST use a firewall that blocs all unwanted traffic. This works fine if you use a service that provides you with compression but its difficult when using regular Internet tools.

This device is designed to prevent airtime shock for satellite broadband users. When you hook it up to a broadband device only compressed email and web traffic will go over it. It blocks everything else. Only your email and the compressed web pages you want to browse will be downloaded over the link.? All windows updates, antivirus, etc. will be blocked from accessing the Internet.

Free Satellite Phone Email
Iridium is now providing free satellite phone email service under the Iridium AxcessPoint Mail & Web name to any subscriber using a 9555 or 9575 with the Purchase of an Iridium Wifi AxcessPoint appliance.

Every iridium user should consider acquiring an Iridium AxcessPoint.

Apple Mobile Devices
You can now use your iPhone, iPad, or iPod Touch with your satellite phone. If using a 9555/9575 you will need an AxcessPoint wifi device since the only way to interface to these phones is via wifi.

If using any other phone (including an IsatPhone Pro) then a wXa-200 is required.